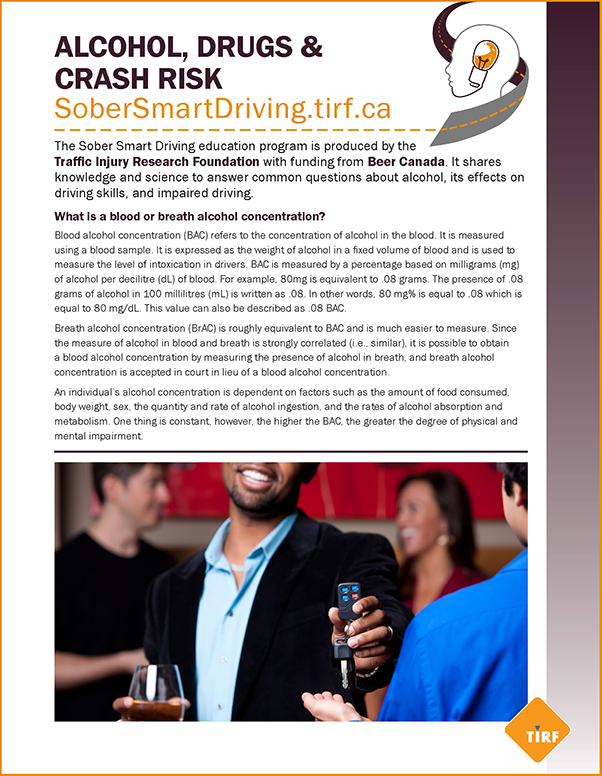 What is a blood or breath alcohol concentration?

Blood alcohol concentration (BAC) refers to the concentration of alcohol in the blood. It is measured using a blood sample. It is expressed as the weight of alcohol in a fixed volume of blood and is used to measure the level of intoxication in drivers. BAC is measured by a percentage based on milligrams (mg) of alcohol per decilitre (dL) of blood. For example, 80mg is equivalent to .08 grams. The presence of .08 grams of alcohol in 100 millilitres (mL) is written as .08. In other words, 80 mg% is equal to .08 which is equal to 80 mg/dL. This value can also be described as .08 BAC.

An individual’s alcohol concentration is dependent on factors such as the amount of food consumed, body weight, sex, the quantity and rate of alcohol ingestion, and the rates of alcohol absorption and metabolism. One thing is constant, however, the higher the BAC, the greater the degree of physical and mental impairment.

A study conducted in Long Beach, California and Fort Lauderdale, Florida demonstrated a notable relationship between risk and BAC begins at BAC levels of .04-.05 and increases exponentially once BACs reach .10 or greater (Blomberg et al., 2009). This means driving even after consuming small amounts of alcohol can increase crash risk. Each drink consumed can slow reaction times and at higher levels result in blurred vision and drowsiness.

How does combining alcohol and drugs affect driving?

An extensive body of research has established alcohol consumption by drivers can increase the risk of collision (e.g., Mayhew et al., 1986). Multiple studies have been conducted in many countries measuring the role of alcohol in fatal crashes. Since the 1980s, the prevalence of alcohol use by drivers has declined, along with the prevalence of alcohol in fatal crashes (Mayhew et al., 2005). More recently, progress has been less pronounced compared to the gains made in the 1990s and early 2000s. By contrast, much less is known about the contribution of drug-impaired driving to serious collisions or the prevalence of drug use by drivers. Specifically, while alcohol-impaired driving has declined for more than a decade in Canada, drugged driving seems to be increasing (Robertson et al. 2017).

There are many reasons for much less knowledge about the role of drugs in fatal crashes as compared to alcohol:

What are the implications of combining alcohol and drugs?

Mixing alcohol with drugs (both legal and illegal drugs) can be very dangerous. Alcohol is a depressant that slows down the body’s central nervous system which controls heart rate and breathing. The sedative effects of alcohol can be enhanced when combined with another drug to the point where the body could completely shut down. This combined effect of alcohol and drugs further impairs the ability to drive and increases collision risk. Of great concern, the combined effect of alcohol with marijuana is greater than the impairment of either substance on its own.

For example, there is a substantial body of evidence showing a high correlation between alcohol use and marijuana use (Christophersen, 2006). In studies investigating the presence of alcohol and drugs among drivers in fatal crashes, it is not uncommon to find ¾ of those who are positive for cannabis are also positive for alcohol. Based on 2006 survey data, 69% of those who reported driving after using marijuana also reported driving within two hours of drinking (Stewart 2006). In 2017, the Traffic Injury Research Foundation reported from 2000 to 2014 fatally injured drivers who tested positive for cannabis increased from 74% to 83%. Although this does correspond with an increase in testing, the data also revealed the presence of other types of substances, such as CNS depressants and hallucinogens (TIRF, 2017). In 2019, follow-up data supported these results and confirmed polysubstance use was on the rise among fatally injured drivers (TIRF, 2019).

How big is the drug-impaired driving problem?

Roadside surveys have also been used to study the drugged driving issue, including one conducted in British Columbia in 2011. This survey showed 10% of drivers tested positive for alcohol consumption and 7% tested positive for drugs (Beirness and Beasley, 2011). In the US, the most recent national roadside survey was conducted in 2013-2014 and demonstrated 8.3% of weekend nighttime drivers on the road had consumed alcohol and 1.5% of weekend nighttime drivers had a BAC at or above .08 (Ramirez et al., 2016).

Moreover, all the studies conducted in Canada over the past few decades have found the most commonly detected illegal substance was cannabis; 11% in the TIRF studies in Ontario (Cimbura, 1982; Cimbura et al., 1990; Beirness and Beasley, 2011), 13% in the B.C. study, and 19.5% in the Quebec study, both of which were cited above. Drivers who were positive for cannabis were much more likely to be male and under the age of 25. Such findings are not unique to Canada (see for example Drummer et al. 2004 for examples of Australia). However, one of the factors that make it difficult to determine what role cannabis played in fatal crashes is the presence of not only the drug but alcohol as well. For example, in the Ontario study, among those who were positive for cannabis, 84% were also positive for alcohol. Similar results are found based on TIRF’s National Fatality Database. Among all fatality injured drivers who tested positive for cannabis, over two-fifths (43.4%) also tested positive for a second substance; among those, 73.0% were positive for cannabis and alcohol (Brown et al., 2019). Therefore, it becomes difficult to determine which substance caused the impairment (and to what degree) that resulted in the fatal collision.