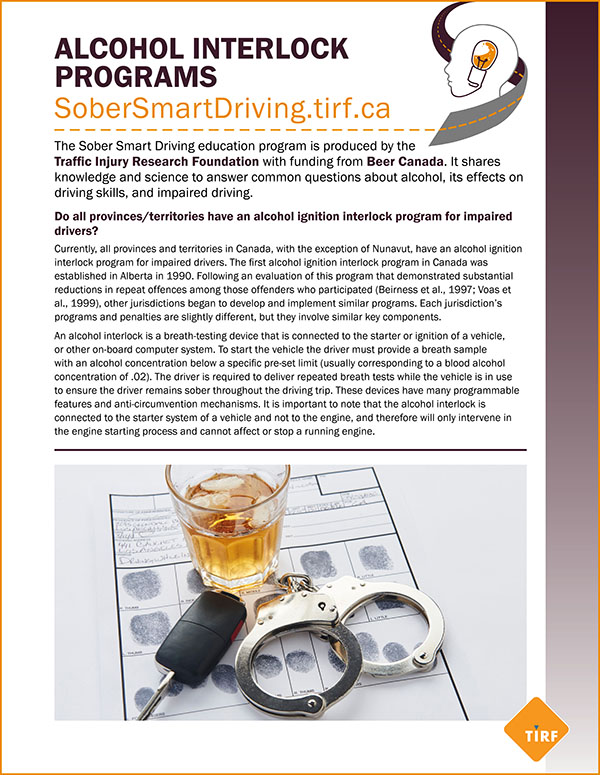 Do all provinces/territories have an alcohol ignition interlock program for impaired drivers?

Currently, all provinces and territories in Canada, with the exception of Nunavut, have an alcohol ignition interlock program for impaired drivers. The first alcohol ignition interlock program in Canada was established in Alberta in 1990. Following an evaluation of this program that demonstrated substantial reductions in repeat offences among those offenders who participated (Beirness et al., 1997; Voas et al., 1999), other jurisdictions began to develop and implement similar programs. Each jurisdiction’s programs and penalties are slightly different, but they involve similar key components.

An alcohol interlock is a breath-testing device that is connected to the starter or ignition of a vehicle, or other on-board computer system. To start the vehicle the driver must provide a breath sample with an alcohol concentration below a specific pre-set limit (usually corresponding to a blood alcohol concentration of .02). The driver is required to deliver repeated breath tests while the vehicle is in use to ensure the driver remains sober throughout the driving trip. These devices have many programmable features and anti-circumvention mechanisms. It is important to note that the alcohol interlock is connected to the starter system of a vehicle and not to the engine, and therefore will only intervene in the engine starting process and cannot affect or stop a running engine.

Can an impaired driving conviction impede an individual’s ability to travel to other countries?

Travel to the United States by Canadian residents

According to the U.S. Consular Services in Canada:

Any past criminal record must be declared at the U.S. border and it is illegal to attempt to enter the U.S. with a criminal record and not disclose it. Not all criminal convictions create an ineligibility to enter the U.S., but attempting to gain entry without declaring that you have been arrested could result in a permanent ineligibility to enter the country and/or detention at the U.S. Department of Homeland Security enforcement facility while a Customs and Border Protection officer determines your admissibility.

Generally speaking, an impaired driving conviction should not bar you from entering the U.S. In most cases, only individuals convicted of felony offences or crimes of “moral turpitude” (cf. U.S. Customs and Border Protection Agency for an explanation) are prevented from entering the U.S. In addition, U.S. Courts have determined that a drunk driving conviction (not involving injury or death) does not constitute a crime of moral turpitude. However, at a minimum you should be prepared to disclose any criminal convictions, and this may result in additional investigation or delays at the border.

For those with an impaired driving conviction who want to enter the U.S., there are several options to do so. Several experienced defence attorneys suggest that individuals carry a certified true copy of the information relating to the conviction (court documents) along with the relevant section of the Criminal Code of Canada (CCC). They also suggest it may be beneficial to have a letter from your doctor stating that you do not suffer from alcohol dependency or drug addiction. Lastly, having a certified true transcript of the evidence underlying the conviction is also recommended by a number of defence attorneys.

If you have previously attempted to cross the U.S. border without documentation (or your crime has not been pardoned), you may have a Citizenship and Immigration Services (USCIS) file and a Federal Bureau of Investigation (FBI) file. If this has occurred, you will be required to apply for a U.S. Entry Waiver. The waiver is basically an admission of your offence and disclosure of the details surrounding it. Fingerprints must be submitted for identification purposes to both the Royal Canadian Mounted Police (RCMP) and the FBI. The waiver process can be quite lengthy. It can take between three to ten months to make the application and gather all of the necessary supporting documentation. It can then take an additional five to 12 months for the Immigration and Naturalization Service (INS) to review the application and issue the waiver. These waivers can also cost more than $500 to complete.

Travel to Canada for U.S. residents

For an U.S. resident with an impaired driving conviction on their record, gaining entry into Canada is an equally complicated process. An individual who has been convicted of a crime may be considered rehabilitated and eligible for entry after a certain period following the completion of their sentence (for impaired driving this is typically after five years). If the person cannot qualify, they may apply for individual criminal rehabilitation after the five-year waiting period. The process for submitting this application involves acquiring supporting documentation and paying a $180 fee. Again, this process can take in excess of a year to complete.

Travel issues are not only restricted to border crossing but also air travel. For individuals who land in Canadian airports there is a requirement to clear customs, even if their final destination is outside of Canada. If an individual has an impaired driving conviction they may be detained for additional screening and interrogation before being permitted to enter Canada or make a connection on an international flight.

Ultimately, travel can be greatly restricted as a result of an impaired driving conviction and there is great inconvenience and cost associated with acquiring special travel waivers or exemptions. Several nations may outright deny entry to anyone who has ANY criminal charges/convictions if there are no distinctions between classes of offences (as is the case in Canada). These are all consequences outside of the traditional court or administrative sanctions which demonstrate how the decision to drink and drive can have unanticipated consequences.

* The provision of this information does not constitute an endorsement by the Traffic Injury Research Foundation.