Home > Topics > Drinking & Its Effect on Driving > Alcohol & the Body 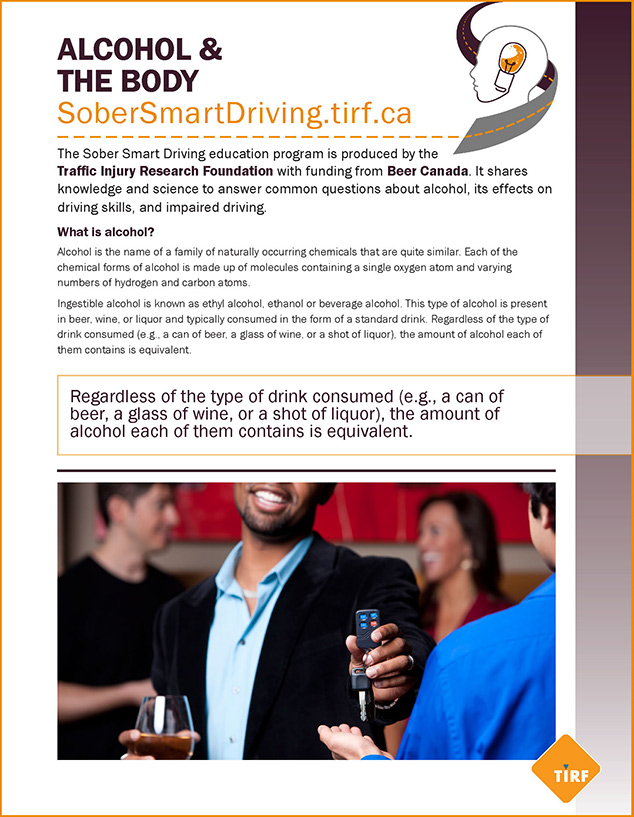 Alcohol is the name of a family of naturally occurring chemicals that are quite similar. Each of the chemical forms of alcohol is made up of molecules containing a single oxygen atom and varying numbers of hydrogen and carbon atoms.

Ingestible alcohol is known as ethyl alcohol, ethanol or beverage alcohol. This type of alcohol is present in beer, wine, or liquor and typically consumed in the form of a standard drink. Regardless of the type of drink consumed (e.g., a can of beer, a glass of wine, or a shot of liquor), the amount of alcohol each of them contains is equivalent.

How is alcohol absorbed in the body?

Alcohol can be ingested and absorbed in a variety of ways, but it is most often ingested orally by drinking it. Alcohol can also be inhaled as fumes, absorbed through the eyes or the bowels and injected, however, these methods are dangerous and pose significant risks.

Once alcohol is consumed and enters the stomach, it can be absorbed into the bloodstream through the walls of the stomach. When there is food in the stomach, this slows down the absorption of alcohol as the body is working to break down food and digest it. When the brain senses food in the stomach, it commands a small muscle (the pyloric valve) at the base of the stomach to constrict and cut off the passage of alcohol to the small intestine. When the muscle is constricted, food and any alcohol remain trapped in the stomach where it is broken down before it enters the blood. The pylorus begins to relax as food is digested but the overall effect is to significantly slow the absorption of alcohol. In other words, when food is in the stomach alcohol enters the blood more slowly and the impairing effects are lower. At the same time, the body processes and eliminates alcohol that is absorbed into the blood, and the blood alcohol concentration (BAC) is lower than if alcohol was consumed on an empty stomach.

Conversely, drinking on an empty stomach increases the rate of absorption of alcohol into the bloodstream and increases the level of intoxication more rapidly. When alcohol is consumed on an empty stomach, about 20% is absorbed through the walls of the stomach while the remaining 80% passes through the base of the stomach and enters the small intestine, where it is readily absorbed into the blood.

How is alcohol distributed in the body?

Alcohol has an affinity for water. Once it moves from the stomach into the blood it is distributed throughout the body in the various tissues and organs in proportion with their water content. The water content of brain tissue is fairly high, so it absorbs a substantial share of the distributed alcohol, producing impairing effects.

How is alcohol distributed differently for each sex?

There are some important differences in the way alcohol is distributed in men and women. This is because, unlike other drugs, alcohol is not very soluble in fat. The affinity of alcohol for water, and its lack of affinity for fat, helps explain an important difference in the way alcohol affects men and women. A Swedish pioneer in alcohol research, E.M.P. Widmark, showed the typical male body is about 68% water whereas the typical female body is about 55% water. Thus, when women drink they have less fluid – pound for pound – in which to distribute alcohol.

As a result, when a man and a woman drink the same amount of alcohol under the same circumstances, the woman’s BAC is typically higher. In addition, women are generally physically smaller than men, meaning a lower body weight in which to distribute the alcohol. So, the effects of alcohol on women are generally compounded: first because of the lower water content in their body, and second because of their smaller size and lower weight.

How is alcohol eliminated from the body?

As soon as alcohol enters the bloodstream the body tries to eliminate it. Some alcohol is expelled by the body and remains chemically unchanged (e.g., in breath, urine, perspiration, and tears). A small portion of the ingested alcohol (about 2-10%) is directly eliminated in this manner.

Most of the consumed alcohol is eliminated by the body through the process of metabolism. Metabolism is a process of chemical change in which alcohol reacts with oxygen in the body and is converted into carbon dioxide and water, both of which are directly expelled from the body.

The metabolism of alcohol in the body takes place mainly in the liver. An enzyme called alcohol dehydrogenase acts to speed up the reaction of alcohol with oxygen. The speed of this reaction varies somewhat from person to person, and even from time to time for any given person. On average, a male’s BAC decreases by about 0.015 per hour. For example, if a male reaches a maximum BAC of 0.15, it takes about 10 hours to eliminate all of the alcohol. In practical terms, this means a typical male eliminates about two-thirds of a drink per hour; a typical female burns up about one-half of a drink in an hour.

Once alcohol has been consumed, nothing can speed up the metabolism or the process of elimination. Drinking coffee, exercise, deep breathing, or a cold shower will NOT speed up the elimination process.

What effects does alcohol have on the brain?

The effects of alcohol on the brain may include lapses in memory, slurred speech, slowed reaction times, and impaired motor skills. While most of these side effects subside as alcohol is eliminated from the body, continual consumption of large amounts of alcohol over an extended period can lead to permanent brain damage.

The impairing effects of alcohol on judgment and memory are significant. Alcohol can disrupt the processing of recent events and experiences into long-term memories (Westrick et al. 1988; Mintzer and Griffiths, 2002). Large quantities of alcohol can produce blackouts which are periods when individuals do not remember what happened (White, 2003). These lapses in memory are especially common during episodes of binge drinking. During these intervals of time, individuals may participate in risky or dangerous behaviours such as driving while impaired or having unprotected sex without being aware of their actions. They are unlikely to recall these actions when sober.

Studies of repeat impaired driving offenders reveal neurocognitive impairments, particularly of memory capacity and executive functioning, are more common in this population (Ouimet et al. 2007). In other words, these offenders are less able to learn and retain information, inhibit behaviour, make and follow through with plans, or successfully engage in treatment interventions. They have few behavioural inhibitions and seek immediate gratification (Brown et al., 2009). Prolonged and excessive drinking can also affect cognition by physically shrinking the brain, which MRI scans show is especially striking in women, who have less of a stomach enzyme needed to digest alcohol (Wuethrich, 2001).

The National Institute on Alcohol Abuse and Alcoholism (NIAAA) identifies several factors influencing the effects of alcohol consumption on the brain, including:

As previously mentioned, long-term alcohol consumption can lead to strokes, dementia, alcohol-related psychoses, and developmental issues in unborn children. It can also contribute to depression and exacerbate other mental health disorders such as schizophrenia. A common brain disorder among persons with alcohol abuse is Wernicke-Korsakoff Syndrome. The disorder is a combination of two syndromes (Wernicke’s encephalopathy and Korsakoff’s psychosis) affecting several areas of the brain, particularly the cerebellum. Some of the symptoms associated with the disorder include mental confusion, paralysis of the ocular nerves, loss of muscle coordination, difficulty learning and retaining information, and loss of memory (National Institute of Neurological Disorders and Stroke, 2007).

Much of the brain damage linked to alcohol consumption is irreversible and can result in the need for full-time custodial care.

What are the effects of alcohol on motor coordination?

When alcohol (ethanol) is swallowed, it is not digested like food. First, a small amount is absorbed directly by the tongue and mucosal lining of the mouth. Once in the stomach, some is absorbed through the stomach lining and some is broken down by enzymes in the stomach. Most (approximately 80%) passes into the small intestine and is absorbed rapidly into the blood (Robertson, Wood, & Holmes, 2014; Voas & Lacey, 2011).

There is a vast body of research which demonstrates the consumption of alcohol impairs motor coordination. Ethanol influences numerous physiological processes and systems in the human body and produces impairing effects. It exhibits a dose-dependent depressive effect on the central nervous system (CNS) which means impairing effects and levels of impairment experienced at specific blood alcohol concentration (BAC) levels are highly consistent across individuals. Further, research has demonstrated alcohol consumption decreases control over their motor coordination in key executive functions, such as distance perception. In addition, the impairing effects are still measurable in the post-alcohol or hangover phase (Ogden and Moskowitz, 2004; Verster, 2009; Moskowitz, Burns, Fiorentino, Smiley, & Zador, 2000).