Home > Topics > Drinking & Its Effect on Driving > Alcohol & Your Health 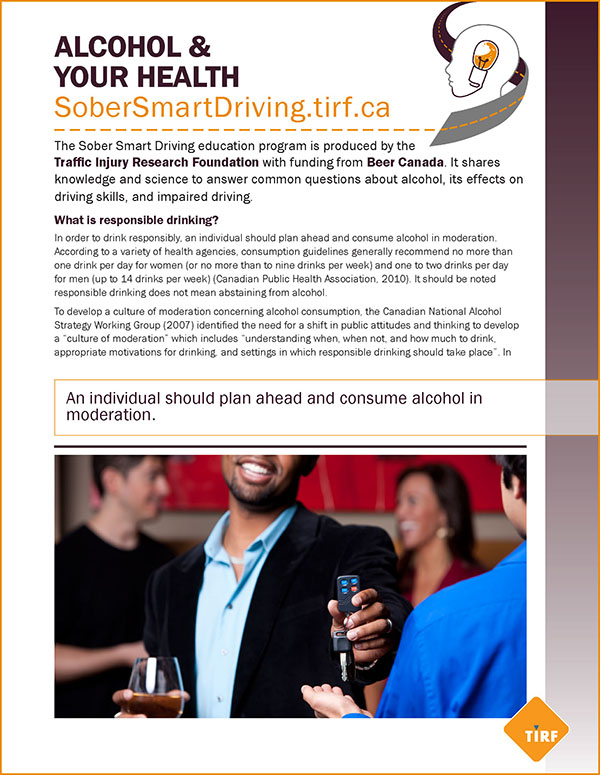 What is responsible drinking?

In order to drink responsibly, an individual should plan ahead and consume alcohol in moderation. According to a variety of health agencies, consumption guidelines generally recommend no more than one drink per day for women (or no more than to nine drinks per week) and one to two drinks per day for men (up to 14 drinks per week) (Canadian Public Health Association, 2010). It should be noted responsible drinking does not mean abstaining from alcohol.

To develop a culture of moderation concerning alcohol consumption, the Canadian National Alcohol Strategy Working Group (2007) identified the need for a shift in public attitudes and thinking to develop a “culture of moderation” which includes “understanding when, when not, and how much to drink, appropriate motivations for drinking, and settings in which responsible drinking should take place”. In other words, individuals are encouraged to drink sensibly and avoid situations in which decision-making is impaired and they are likely to sustain injuries or experience harm, for example as a result of impaired driving. Responsible drinking is the opposite of excessive alcohol consumption or binge drinking.

What is binge drinking?

Binge drinking has been defined differently by different stakeholders. Most often, the definition highlights the consumption of large amounts of alcohol within a short period with the primary goal of becoming intoxicated or very intoxicated. In other words, binge drinking is a single occasion of drinking heavily. According to the Canadian Medical Association, a binge drinking episode consists of five or more standard drinks for men and four or more standard drinks for women on a single occasion. Binge drinking can overlap with social drinking and is a growing concern among youth, particularly college and university students. In this regard, a standard drink is considered to be one 355 ml bottle of beer, one 150 ml glass of wine or approximately 40 ml of distilled spirits (e.g., rum, vodka, whisky). It is important to note the amount of alcohol in each of these types of drinks is more or less equivalent, so the impairing effects are more or less the same.

What are the risks associated with binge drinking?

Binge drinking can lead to many negative consequences with potentially serious or life-long effects and possible death. Some of the risks associated with excessive alcohol consumption include:

How does alcohol consumption affect youth?

Young people are vulnerable to alcohol-induced brain damage, which could contribute to memory loss and poor performance in the classroom (and later in the workforce) as well as behavioural problems. Adolescence is the transition period between childhood and adulthood. During this time, significant changes occur in the body including the formation of new networks in the brain. Frontal lobe development and the refinement of neural pathways and connections continue until during teenage years and into the early 20s (Begley, 2000). Damage from alcohol at this time can be long-term and irreversible affecting both memory and behaviour control (White, 2001; Brown et al., 2001). By exposing the brain to alcohol during this period, key processes of brain development may be interrupted which can cause damage.

Medical findings confirm this danger: the hippocampus, the part of the brain that is the centre for learning and memory, is smaller in adolescents who are alcohol-dependent (Nagel et al., 2005). These youth may never be able to catch up to their peers in adulthood because they will have learning difficulties, memory loss, and trouble maintaining employment and relationships.

The problem of youth drinking is cause for concern. According to Statistics Canada and the 2018 Canadian Community Health Survey, between 3% to 5% of Canadian youth aged 12 to 17 have consumed alcohol at a rate of five or more drinks per week, a number which has been consistent since 2015. Further, 5.6% of Canadian youth aged 12 to 17 reported consuming an alcoholic beverage in the previous 12 months. Among those who did drink, 37.8% of them did so at least once a month. This is despite the fact it is illegal to sell alcohol to persons under the age of 19 in Canada (18 in Quebec) (survey source: https://www150.statcan.gc.ca/n1/pub/82-625-x/2019001/article/00007-eng.htm).

Similar numbers exist in the US according to the National Institute for Alcohol Abuse and Alcoholism. They report that by age 15, about 29% of teens have had at least one drink and by age 18, this number increases to 58%. They estimate that, in 2018, 7.1 million young people ages 12-20 drank alcohol beyond “just a few sips”, despite the legal drinking age being 21 in most states. Further, they also report 4.3 million youth binge drinking at least once a month (survey source: https://www.niaaa.nih.gov/publications/brochures-and-fact-sheets/underage-drinking).

Statistics such as these are disturbing given the earlier the age of onset alcohol consumption, the greater the likelihood usage may develop into addiction later in life. Youth who begin drinking at a younger age are more likely to drink heavily frequently and experience alcohol-related harm (National Alcohol Strategy Working Group, 2007), as well as drink and drive. People who begin drinking before age 15 are four times more likely to develop alcohol dependence at some time in their lives compared to those who have their first drink at age 20 or older.

The negative consequences associated with underage drinking are numerous:

Given the serious nature of these consequences, sharing information with adolescents about the dangers of alcohol is quite important.

Is there a relationship between alcohol consumption and depression?

Further, the Canadian Institutes of Health Research (CIHR) reports that alcohol and other substances can be used for non-medical reasons by the user in response to growing mental health issues such as depression. They note in these circumstances polysubstance use is common and dangerous to the user (CIHR, 2010). Currently, it is unclear if alcohol and substance use is a causal factor or a result of mental health issues, although there is a strong link between the two.

What are the consequences of alcohol when drivers are fatigued?

Drowsiness increases with the length of time a person has been awake. People who get inadequate sleep or experience poor quality sleep may experience acute or chronic sleepiness (Findley et al., 1989; Cohen et al., 1992; Young et al., 1997). Drowsiness or sleepiness normally refers to the urge to fall asleep as the result of a biological need. It is a physiological state of the body that is irreversible in the absence of sleep (Rani, Reddy, & Mounika, 2019). It is governed by a circadian sleep-wake cycle that makes most people feel sleepy twice a day, at night and in the afternoon (Dement & Vaughn, 1999).

Sleep loss can increase drowsiness and the risk of crash involvement. Alcohol and other medications are known to enhance drowsiness (Horne et al., 2003; Ray et al., 1992; Ceutel, 1995). More importantly, the use of alcohol can exacerbate the performance deficits associated with drowsiness creating a level of risk greater than either factor alone.

Low doses of alcohol relax individuals by slowing the activity of the sympathetic nervous system (Roehrs & Roth, 2001). With larger doses, alcohol can further slow reactions and diminish the ability to perform tasks such as driving. When combined with inadequate sleep, alcohol can become a potent sedative and increase the risk of being involved in a crash.

Prolonged alcohol consumption can potentially induce sleep disorders as it disrupts normal sleep patterns and the time an individual sleeps per night (NIAAA, 1998). The consumption of alcohol within an hour of bedtime may help one to fall asleep more quickly but it is likely to result in inadequate sleep during the second half of the sleep period. This is characterized with being awakened by dreams and having difficulty falling back asleep (Landolt et al., 1996). This disruption in sleep can lead to fatigue and drowsiness during the day as well as a lack of alertness.

Therefore, drivers under the influence of alcohol are at risk for involvement in crashes due to fatigued driving because alcohol has sedating effects that, when combined with fatigue or drowsiness, can exacerbate performance deficits (Horne et al., 2003; Lumley et al., 1987).