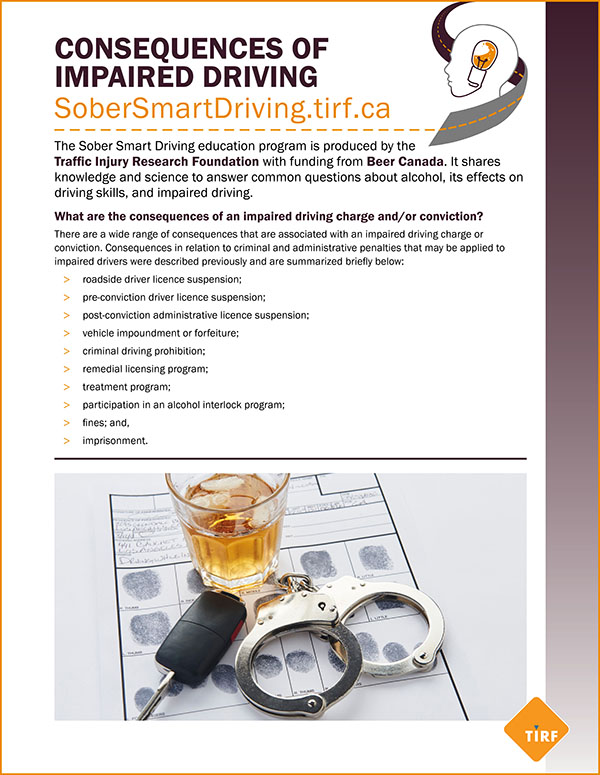 What are the consequences of an impaired driving charge and/or conviction?

There are a wide range of consequences that are associated with an impaired driving charge or conviction. Consequences in relation to criminal and administrative penalties that may be applied to impaired drivers were described previously and are summarized briefly below:

There are also a variety of personal consequences that can impact on an individual’s daily life, finances, and travel ability. These include:

What penalties are applied to young impaired drivers (under age 18)?

Efforts to address impaired driving among youth over the past two decades have focused largely on the development of prevention, education, enforcement, and community-based intervention strategies aimed at reducing the risks associated with alcohol and driving while also seeking to reduce the number of impaired driving offences within this age group. However, less attention has been directed towards the nature of penalties that are applied to these offenders once they have been arrested and convicted, and the extent to which they are effective with this population.

Today, in many jurisdictions across Canada, young impaired drivers are frequently subject to the same traditional penalties that are applied to adult offenders (e.g., fines, probation, community service, treatment, and incarceration) despite limited evidence of the effectiveness of some of these strategies, even with adults (Dauvergne 2013).