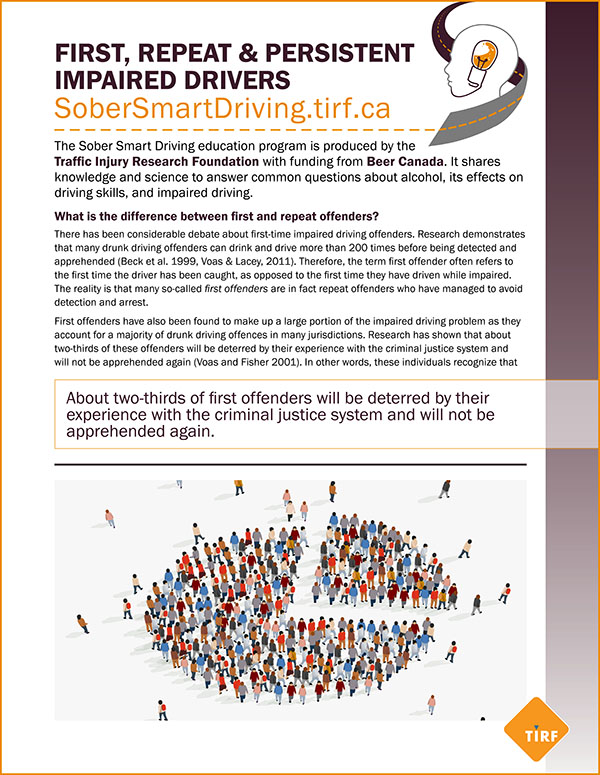 What is the difference between first and repeat offenders?

There has been considerable debate about first-time impaired driving offenders. Research demonstrates that many drunk driving offenders can drink and drive more than 200 times before being detected and apprehended (Beck et al. 1999, Voas & Lacey, 2011). Therefore, the term first offender often refers to the first time the driver has been caught, as opposed to the first time they have driven while impaired. The reality is that many so-called “first offenders” are in fact repeat offenders who have managed to avoid detection and arrest.

First offenders have also been found to make up a large portion of the impaired driving problem as they account for a majority of drunk driving offences in many jurisdictions. Research has shown that about two-thirds of these offenders will be deterred by their experience with the criminal justice system and will not be apprehended again (Voas and Fisher 2001). In other words, these individuals recognize that they made a mistake and will not repeat it in the future. For these people, the administrative and criminal penalties they faced combined with the embarrassment of being arrested for impaired driving serves as a learning experience.

Repeat offenders are more difficult to deter using traditional administrative or criminal penalties as demonstrated by their continual offending even when faced with the threat of additional punishment. These individuals do not learn from their negative experiences and continue to drink and drive, often with a suspended or revoked licence. As a result, this group of offenders is more challenging to deal with because consequences seemingly have no effect on their behaviour.

One potential explanation for the continued drunk driving of repeat offenders is alcohol dependency. These offenders typically suffer from some degree of alcohol abuse or addiction which explains their reduced capacity to control their behaviour and reluctance to change. While research has found that many first offenders also suffer from alcohol addiction (Rauch 2005), the occurrence of dependency is much higher among repeat offenders. In an effort to address this problem, it is suggested that all offenders arrested for impaired driving undergo screening for alcohol abuse to determine if assessment and possibly treatment are needed. To reduce the likelihood of any impaired driving offender recidivating, proper steps such as these should be taken to address underlying issues that may be causing the illegal and dangerous behaviour.

The distinction between first and repeat offenders is further complicated when taking Blood Alcohol Concentration (BAC) level into account. High-BACs (.15 or above) are one of the identifying characteristics of repeat and persistent impaired driving offenders. However, many first offenders also frequently drive with high-BACs that are more than twice the legal limit and, therefore, have a significant risk of crashing (Rauch 2005). This risk does not, however, match that of repeat offenders who are responsible for a larger proportion of alcohol-related deaths and injuries (Borkenstein et al. 1964; Simpson et al. 2004; Blomberg et al. 2009).

They are also relatively resistant to changing their behaviour as evidenced by continued offending even after they have faced penalties and other negative consequences. Even though these offenders represent a relatively small portion of the driving population (an estimated 1% of nighttime drivers on the road), they account for nearly two-thirds (65%) of all alcohol-related driver fatalities and are responsible for making 84% of all drinking and driving trips. In other words, they drink and drive more frequently than any other type of impaired driver.

a) Why do repeat offenders pose a greater risk on the road?

Repeat offenders tend to drink excessively which puts them at very high risk of causing a serious crash. To illustrate, research shows that drivers with a BAC of 0.15 are about 150 times more likely to have a fatal crash than the average non-drinking driver. At a BAC of 0.20 or higher this risk increases to some 460 times (Simpson et al. 1996). Although such drivers account for only a small proportion of all night-time drivers on the road (less than 1%), their high risk makes them a significant threat (Simpson and Mayhew 1991).

While impaired drivers as a whole are often very different and come from all walks of life, repeat offenders tend to share several common characteristics:

Dealing with these highest risk offenders requires a strategy that is anchored in a combination of punishment, surveillance, and treatment. Strategies to reinforce positive behaviour should also be implemented to encourage behaviour change.

c) How much do repeat impaired drivers contribute to the problem?

Although persistent impaired drivers are a relatively small group in the total driving population, they continue to account for a very large portion of the impaired driving problem, including fatal and serious injury crashes. They account for almost one-third (25%) of all fatally injured drivers and about two-thirds (65%) of all fatally injured drivers who are drinking (Simpson et al. 1996; Robertson et al. 2010). To illustrate the impact that this subgroup of offenders has, consider the following:

d) What strategies are available to deal with repeat impaired driving offenders?

The repeat offender represents a constant and serious threat to the safety of everyone on the road. As a result, it is important to identify these individuals and not only separate their drinking from driving but to also target the underlying causes of their criminal behaviour by prioritizing them for referrals to treatment services that are tailored to their individual needs (Williams et al. 2000).