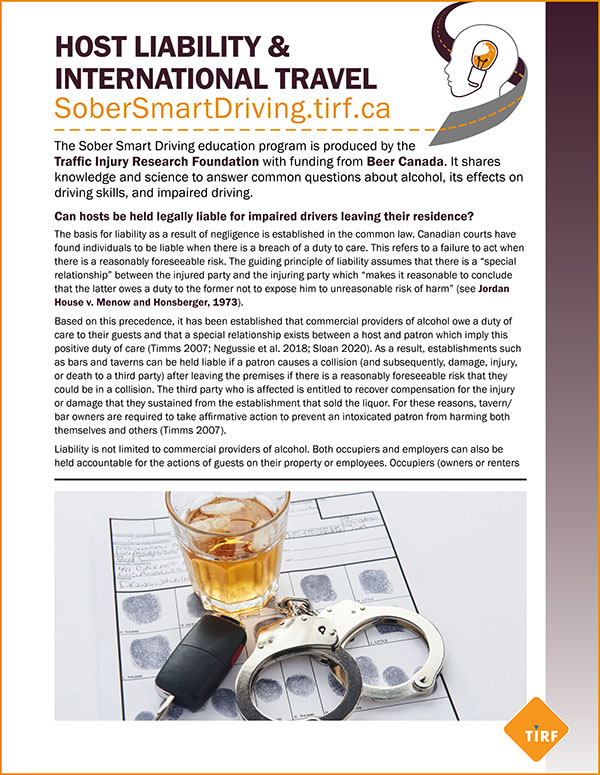 Can hosts be held legally liable for impaired drivers leaving their residence?

The basis for liability as a result of negligence is established in the common law. Canadian courts have found individuals to be liable when there is a breach of a duty to care. This refers to a failure to act when there is a reasonably foreseeable risk. The guiding principle of liability assumes that there is a “special relationship” between the injured party and the injuring party which “makes it reasonable to conclude that the latter owes a duty to the former not to expose him to unreasonable risk of harm” (Jordan House v. Menow and Honsberger, 1973).

Based on this precedence, it has been established that commercial providers of alcohol owe a duty of care to their guests and that a special relationship exists between a host and patron which imply this positive duty of care (Timms 2007; Negussie et al. 2018; Sloan 2020). As a result, establishments such as bars and taverns can be held liable if a patron causes a collision (and subsequently, damage, injury, or death to a third party) after leaving the premises if there is a reasonably foreseeable risk that they could be in a collision. The third party who is affected is entitled to recover compensation for the injury or damage that they sustained from the establishment that sold the liquor. For these reasons, tavern/bar owners are required to take affirmative action to prevent an intoxicated patron from harming both themselves and others (Timms 2007).

Liability is not limited to commercial providers of alcohol. Both occupiers and employers can also be held accountable for the actions of guests on their property or employees. Occupiers (owners or renters of property) can be held responsible for injuries of guests that occur on their property as a result of poor conditions. They can also be held responsible for the conduct of guests and for incidents that arise out of activities (i.e., alcohol consumption) that are allowed on their premises (see Waldick v. Malcolm, 1991).

It has also been found that employers and employees have a special relationship that extends beyond that of inviter and invitee and subsequently, the employer has an obligation to provide a safe work environment and to monitor the behaviour of employees, especially when consuming alcohol (see Jacobsen v. Nike, 1996).

The 1990s also saw an increase in attempts to establish social host liability (i.e., whether or not the host of a party could be held liable for the actions of their guests). The first case that went to court in Canada was decided in March of 2001. In Prevost v. Vetter, the teenage son of the defendants hosted a party at his parents home while they were asleep. Youth were consuming alcohol in the family’s yard and following a noise complaint, the Vetters were awoken by their son but chose to remain in the house assuming that he would be able to handle the situation. As the party dispersed, one of the guests left with six passengers and subsequently crashed causing serious injuries to the plaintiff who was thrown from the vehicle.

Even though the Vetters did not serve alcohol, they did not discourage others from bringing and consuming it on their property. Once they were aware that a party was occurring they were in a position to exercise control and did not (Timms 2007). It was reasonably foreseeable that harm could result from their failure to take control. The case was settled before trial.

Additional cases have tackled the issue of whether there is a duty of care extended to adults at a party but at present, judges have decided that it is up to the government to provide criteria as to when a social host is liable for damage and/or injury caused by one of their guests (see Childs v. Desmoreaux). In reviewing the issue, the Supreme Court left room for liability to prove in a situation where a host continues to serve alcohol to a guest knowing that they are already intoxicated and could potentially be getting behind the wheel of a car (Timms 2007).

How can hosts reduce their liability for impaired drivers leaving their residence?

In order for hosts to be responsible and avoid the risk of being found liable, arrangements should be made ahead of time to accommodate guests who will be drinking. All hosts should consider the following:

Can an impaired driving conviction impede an individual’s ability to travel to other countries?

Travel to the United States by Canadian residents

According to the U.S. Consular Services in Canada:

Any past criminal record must be declared at the U.S. border and it is illegal to attempt to enter the United States with a criminal record and not disclose it. Not all criminal convictions create an ineligibility to enter the U.S., but attempting to gain entry without declaring that you have been arrested could result in a permanent ineligibility and/or detention at the U.S. Department of Homeland Security enforcement facility while a Customs and Border Protection officer determines your admissibility.

Generally speaking, an impaired driving conviction should not bar you from entering the United States. In most cases, only individuals convicted of felony offences or crimes of “moral turpitude” (please see US Customs and Border Protection Agency for an explanation) are prevented from entering the U.S. In addition, U.S. Courts have determined that a drunk driving conviction (not involving injury or death) does not constitute a crime of moral turpitude. However, at a minimum you should be prepared to disclose any criminal convictions, and this may result in additional investigation or delays at the border.

For those with an impaired driving conviction who want to enter the U.S., there are several options to do so. Several experienced defence attorneys suggest that individuals carry a certified true copy of the information relating to the conviction (court documents) along with the relevant section of the Criminal Code of Canada. They also suggest it may be beneficial to have a letter from your doctor stating that you do not suffer from alcohol dependency or drug addiction. Lastly, having a certified true transcript of the evidence underlying the conviction is also recommended by a number of defence attorneys.

If you have previously attempted to cross the U.S. border without documentation (or your crime has not been pardoned), you may have a Citizenship and Immigration Services (USCIS) file and an FBI file. If this has occurred, you will be required to apply for a U.S. Entry Waiver. The waiver is basically an admission of your offence and disclosure of the details surrounding it. Fingerprints must be submitted for identification purposes to both the RCMP and the FBI. The waiver process can be quite lengthy. It can take between 3-10 months to make the application and gather all of the necessary supporting documentation. It can then take an additional 5-12 months for the INS to review the application and issue the waiver. These waivers can also cost more than $500 to complete.

Travel to Canada for U.S. residents

For an U.S. resident with an impaired driving conviction on their record, gaining entry into Canada is an equally complicated process. An individual who has been convicted of a crime may be considered rehabilitated and eligible for entry after a certain period following the completion of their sentence (for impaired driving this is typically after five years). If the person cannot qualify, they may apply for individual criminal rehabilitation after the five-year waiting period. The process for submitting this application involves acquiring supporting documentation and paying a $180 fee. Again, this process can take in excess of a year to complete.

Travel issues are not only restricted to border crossing but also air travel. For individuals who land in Canadian airports there is a requirement to clear customs, even if their final destination is outside of Canada. If an individual has an impaired driving conviction they may be detained for additional screening and interrogation before being permitted to enter Canada or make a connection on an international flight.

Ultimately, travel can be greatly restricted as a result of an impaired driving conviction and there is great inconvenience and cost associated with acquiring special travel waivers or exemptions. Several nations may outright deny entry to anyone who has ANY criminal charges/convictions if there are no distinctions between classes of offences (as is the case in Canada). These are all consequences outside of the traditional court or administrative sanctions that one typically associates with an impaired driving conviction and it demonstrates how the decision to drink and drive can have unanticipated consequences.

* The provision of this information does not constitute an endorsement by the Traffic Injury Research Foundation.

Negussie, Y., Geller, A., Teutsch, S. M., & National Academies of Sciences, Engineering, and Medicine. (2018). Interventions to Reduce Drinking to Impairment. In Getting to Zero Alcohol-Impaired Driving Fatalities: A Comprehensive Approach to a Persistent Problem. National Academies Press (US).