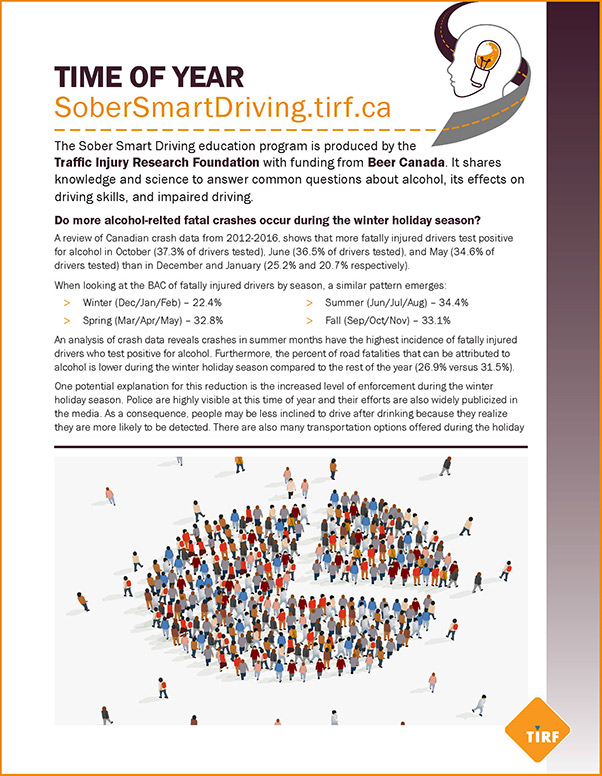 When looking at the BAC of fatally injured drivers by season, a similar pattern emerges:

An analysis of crash data reveals crashes in summer months have the highest incidence of fatally injured drivers who test positive for alcohol. Furthermore, the percent of road fatalities that can be attributed to alcohol is lower during the winter holiday season compared to the rest of the year (26.9% versus 31.5%).

One potential explanation for this reduction is the increased level of enforcement during the winter holiday season. Police are highly visible at this time of year and their efforts are also widely publicized in the media. As a consequence, people may be less inclined to drive after drinking because they realize they are more likely to be detected. There are also many transportation options offered during the holiday season, such as Operation Red Nose, making it easier for people to find a safe ride home.

Consistent with an increased level of enforcement, arrests for impaired driving are also higher in some jurisdictions during the winter holiday season which results in more drivers being removed from the road. To illustrate, from 2008-2017, the greatest percentage of administrative driver licence suspensions in Ontario were issued during the month of December (Ontario Ministry of Transportation 2020). On the other hand, impoundment statistics from Manitoba during 2018-2019 showed that the greatest number of vehicles were impounded during the month of May (Manitoba Vehicle Impoundment Registry 2020). Meanwhile, in Saskatchewan, most alcohol-related traffic offences in the 2017-2019 period occurred in the month of June (SGI 2020).